Home
Featured
Expert’s Guide: Do You Know the Parts of Your Bra?

Learn all the parts of a bra in this comprehensive guide.

In simple terms, a brassiere is known as a bra. It is defined as an undergarment which you wear on the upper part of your body to support the breasts and delicate tissues. The above description of a bra sounds so dull for something that decorative and even impractical. However, it does portray its functionality in a woman’s collection.

In reality, bras come off as one of the most significant and functional types of clothing that most women tend to wear every day regardless of whatever happens outside it. Learning the various parts of a bra is a rare occurrence even for women who have been wearing this undergarment for the longest time.

Women who are conversant with the different parts of a bra feel empowered and wish they had done it in their early stages of life. You will notice that some parts of a bra are quite unfamiliar. For instance, understanding the use of thermoplastic in moulding the bra cups to take the shape of a woman’s curve. Also, the bra’s adjustable underwire that offers support to the breast’s connective tissues. Getting to know all these can be likened to re-attending those science classes back in the days.

Bra Anatomy: Parts of a Bra

Here are the main parts of a bra you need to know: 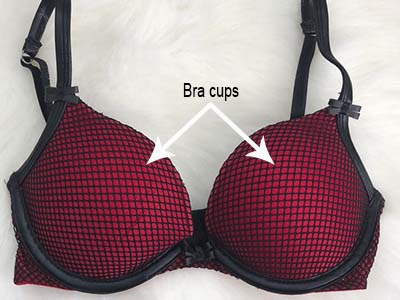 The cups are the most significant part of a bra. The bra cups not only cover but helps support the breasts as well as keeping them in place and shape. It can either be padded or unpadded. Bra cups can offer full coverage for the breasts or cover half or three quarters.

When buying a bra, you have to get the right cup size. The cup size is achieved by getting the difference between the bust and band sizes. However, you will come across different theories of attaining an accurate cup size. You can also check out how to measure your bra size in our site as well. The cups sizes are about eight to cover most breast sizes and start at A and are usually indicated by the bra size in alphabets.

The bra cups offer ultimate support and comfort the breasts would need. Besides, for additional support, some bra cups have a lining on the inner part. Usually, the manufacturer’s insert a foam between the outer material and the lining in cases where the cups are padded. The padding the cups helps enhance the shape of the breasts and equally makes them look bigger.

Some bras additionally have pockets to secure the pads in the bra comfortably. You can take the inserts or pads out and also put back with ease. On an ideal bra, the cups will not only contain the breasts but also fit perfectly well without gaps or bulges.

The upper cup is the section that covers the upper part of the breasts. It typically features a stretchy material, usually lace, which gives the bra a decorative look.

Just like in the explanation above, the lower cup covers the breasts right below. It offers both lift and support for the breasts. 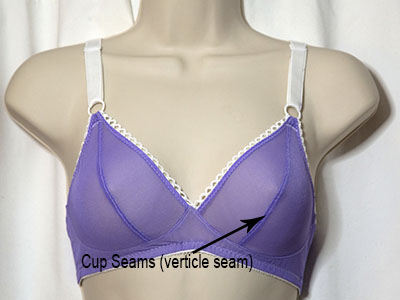 The seams give the bra cups an excellent shape. Regarding the shape of the cups, you can either go for moulded or non-moulded depending on the shape of the breasts you want: pointy or round shape cup.

Non-moulded bra cups equally have seams. However, the seam stitches come in various designs and follow different directions, but this would depend on the designer.

On the other hand, moulded cups don’t have seams. The cups here are usually thermoplastically pre-formed to hold the shape permanently. In terms of bras, a decollate finish describes a flat finish in the cups and different parts of a bra. The finish ensures the bra feels smooth against the skin and offers a seamless look underneath clothing. 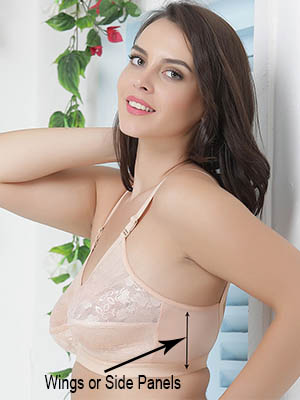 The side panel is the part near the bra cups that offer support on the sides. Usually, bras either have low/short or high/tall wings. 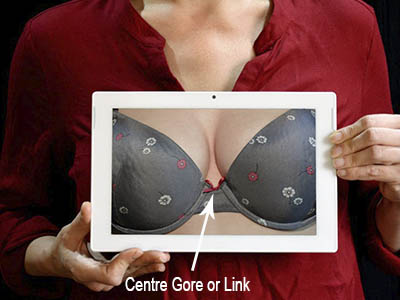 Gore is the middle part of the bra between the cups. It is where the wire joins in the middle of the bra. The centre Gore is noticeably negligible in some bras while in others, it’s big enough that it does change the shape of the bra.

You will notice that in some underwire bras, the link has sewn wire channels that crisscross at the top. The height and size of the link or centre gore can alter the shape and placement of the bra cups. A bra in the right size should have the link slightly touching the body in the middle. Also, the cups should perfectly fit symmetrically on both sides, especially for bras with underwire. 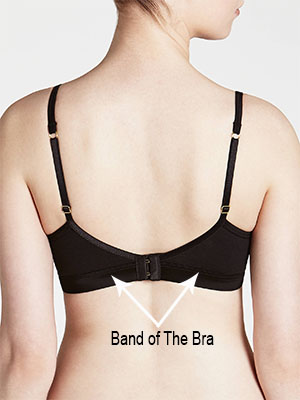 The bra band is also known as the chest band or the underband. It is the band that does secure the bra and runs around the rib cage.

The band is the most significant strength of any bra since it supports most, if not all, of the breast’s weight. Most of the support from the bra should come from the band and not the straps. The underband is different at the front and back. The band at the back is present in every bra yet not all bras have a front band. The link is also part of the band. Usually, band sizes come in sizes 28 to about 50 Inches; this is 71 to 127 in centimetres.

It is the band right below the edge at the bra’s front. There are several different variations when it comes to the width of the front underband. Not every bra has an underband.

The Underband at The Back

The back underband offer support for the breasts from below. A thick back band would provide more support compared to a thin one. If you want to test for fitness, slide two fingers under the band comfortably. The band should neither be too loose nor too tight.

For a more comfortable fit, the back underband features an elastic strip at the end. You may place the thin elastic strips on edges for elasticity. 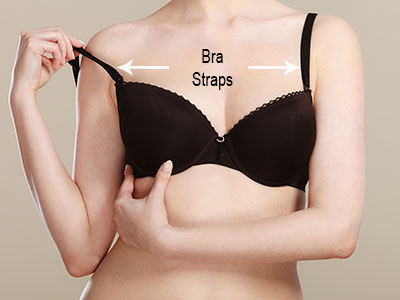 The bra straps connect the back and front of the bra, goes over the shoulders and is a dominant function in terms of the bra’s support. The straps may be broad for additional support for larger bra sizes. Bras in small sizes may have narrow straps, while strapless bras have no straps.

Most bra straps are adjustable for a more customized fit, while other bras come with detachable straps. Besides, some bras come with two extra transparent straps ideal for wearing under of-shoulders dresses and those with thinners straps. 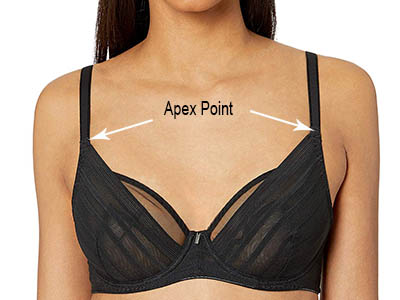 It is the high point of the bra cups where the shoulder straps join at the front. 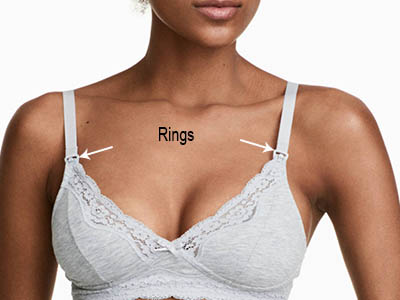 They are plastic and metal rings that join the straps to the bra’s band. Rings aid in adjusting the strap’s length to what suits you. 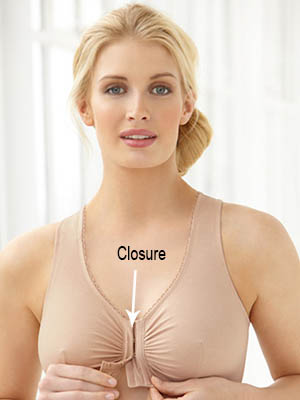 Bras have closures either at the front or back save for a sports bra. Usually, the purpose of these closures is to tighten or loosen the bra’s band for a secure and more comfortable fit. 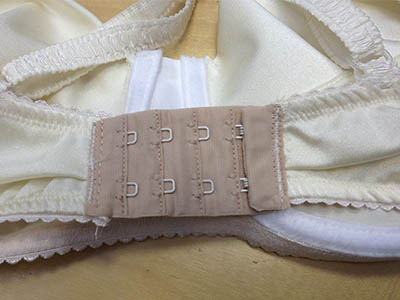 When it comes to bras, hook and eyes are the most common fasteners. For a more comfortable fit, you can fasten the hooks since they come in at least two or more hooks and several eye rows. Also, for women who wear larger cup sizes, the more the hooks, the more breast support.

For bras that open at the front, manufacturer’s use a clasp instead of the hook and eyes as fasteners. 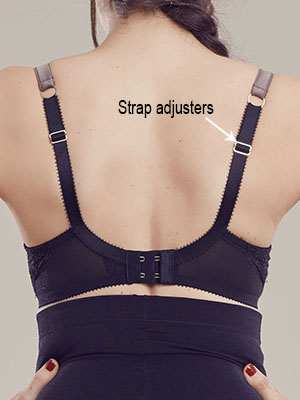 The sliders typically allow you to adjust the straps to the length of your body comfortably. You can lengthen and shorten the straps as you deem fit by simply moving the adjusters/ sliders. 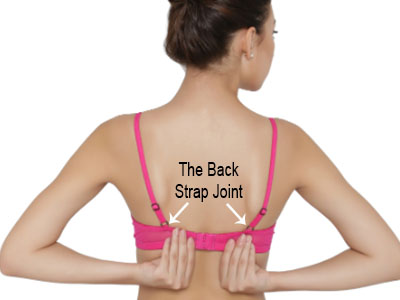 The back-strap joint is usually where the straps join to the bra’s band at the back. However, it’s different for each bra.

The back strap joins the bra in two different ways. The first case scenario is where the back-band joins to the strap at 90◦, forming a square shape at the back. In the second case, the strap connects the bra’s band at an oblique angle.

Most women prefer a bra that forms an asymmetrical shape since it offers ultimate support compared to the other one. In this case, breast’s weight is evenly distributed on the band, reducing any strain on your shoulders. 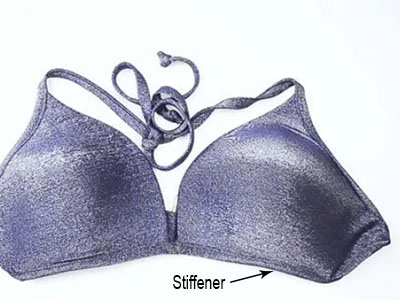 A stiffener is the section of the bra that offers extra support in a bra with no underwire. It also helps prevent the sides from rolling up.

Not all bras have underwires for support. Underwires are usually fitted right below the bra cups on the edges. A major underwire role is to lift the breasts creating a more flattering look. It’s additionally meant to counter sagging of breasts.

There is a sew-in U-shaped channel with underwire bras usually made of plastic or metal inside. It encloses the breasts from the bottom, lies flat against the rib cage from the centre of the chest to the underarms.

The bra’s underwire provides extra support, shapes, and lifts the breasts. It is for these reasons that an underwire should lie right below the breasts as opposed to lying on them. With an ill-fitting bra, the underwire tends to lie on the breasts causing it to poke out of its channel. 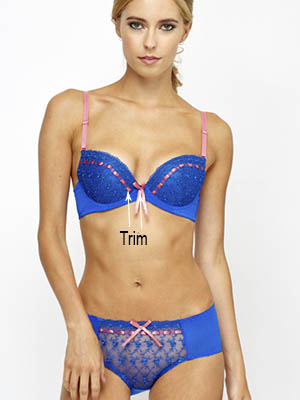 Trims are the flowers and bows at the middle on top of the bra.

All these parts of o bra should equally work together to provide ultimate support and help prevent the breasts from pre-mature sagging.

The bra should allow just about enough stretch for the breasts to fit perfectly and should be made with comfortable fabric for everyday wear. Also, the bra’s fabric should be not only comfy but also attractive to capture women’s attention.

It may seem like a tough call on such a simple piece of undergarment, but it does offer all that with a perfect flair.