Home
Plus Size
Plus Size Bra with Clear Plastic Straps

Which is the best plus size bra with clear straps? Read on to find out.

Strapless bras have evolved over the years. There are a variety of reliable styles and options to choose from today, especially if you’re looking for one that will actually stay up. The bras are becoming more comfortable with a more inclusive range in sizes, enabling women with fuller figures as well as plus size women to find strapless bras that work for them. 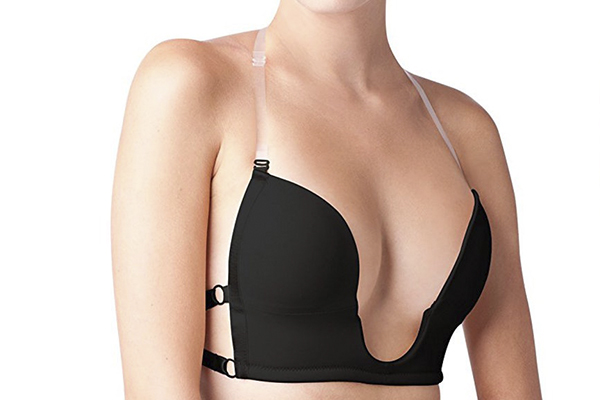 Although strapless bras can now provide better support, this isn’t the same case when it comes to people with bigger or fuller breast sizes because they can barely get the perfect uplift or shaping from a strapless bra.

If you’d like to obtain more support as well as be able to have a wide range of bra shapes that you can put on with clothes which have tricky necklines, you can simply do this by wearing a bra that has plastic cups.

Bras that have plastic straps come in handy when you want to wear T-back or halter dresses or tops and also under some specific type of tank tops. These bras also provide a happy medium when it comes to letting your bra straps show and being an eyesore as well as going completely strapless.

If you’re looking for bras that have inbuilt clear plastic straps, manufacturers don’t produce such bras, you’ll be forced to look for a convertible or a multi-way bra instead. Although this article is mostly centered on convertible bras, there are a good number of nice bras that are not on the list. The list below is of 9 top picks for fuller and plus size bras which have clear plastic cups.

Majority of multi-way bras don’t come with clear bra straps. Luckily, there are a good number of manufacturers that produce transparent bra straps which are reliable. If you’re looking for a set of straps which can handle some heavy lifting, you should probably go for straps either 12mm or wider in size. Divas and Braza both manufacture bra straps that are highly recommended.

Ensure that you measured the strap length that you’ve selected for a specific bra so that you don’t end up buying something that will not suit your needs perfectly.

If you’re looking to buy a perfect convertible bra, consider going for this Wacoal. The strapless plus size bra with clear straps is the most secure-feeling which you will ever wear. There is a full review on it here. If you need more information don’t hesitate to read it. The bra converts itself to a criss-cross, halter or even a one shoulder, making it a perfect pair to clear straps.

The Elomi Women’s Plus Size is probably our controversial choice of the day. You might get a little skeptical about this bra because of its cut and sew styled cups, which don’t provide the much needed structural power on their own in turn providing you with reliably decent shaping/support for an F cup and above.

However, as a multi-way bra, it works perfectly. It has two different sets of loops on the band at the back, allowing you to choose the width at which you’d prefer to attach your straps. Elomi Women’s is one of the rare multi-way/strapless bras which provide you with shape instead of the standard rounded/molded look. This is what makes it a great pick for people who are fuller at the bottom and are often worried about gapping. Some people might not like it because it falls a little on the pointy side and its seams may be visible on lightweight clothing.

The Goddess Adelaide strapless bra is quite similar to the Elomi Maria, but has some advancement when it comes to its less pointy shape. The cups of the plus size bra with clear straps rise pretty high though, meaning that the shape wouldn’t be suitable for different chests. However, this bra has similar support issues as the Maria bra has as a strapless bra. It’s a great multi-way bra for people with bigger cup sizes which go up to an L, making it worth a glance.

This Delimira is a great budget-friendly multi-way bra with clear straps (plus size) that will work for most people. Delimira is one of those bras isn’t the best strapless bra but works perfectly well once straps are added on it. The cups on this bra come up pretty high and aren’t bulky making it the perfect pick for people with breasts that aren’t very full. The bras have a cut and sew design, making the seams a little unfavorable because it doesn’t work for everyone.

However, if you’re looking for a multi-way, smooth cup bra that is affordable and works well as a strapless, then you should check out the Delimira Women’s Full Figure Underwear Contour Multi-way Strapless Bra Plus Size.

If you’re looking for another budget-friendly option (though a bit expensive than most), the Wingslove Women’s Strapless bra is the best pick. As the name suggests, you can easily tell who is being emulated here. There’s a conviction which states that ‘you get what you pay for’. According to the reviews on this bra, it stands as a great middle of the road pick because it is rated as the best convertible bra of its price range. 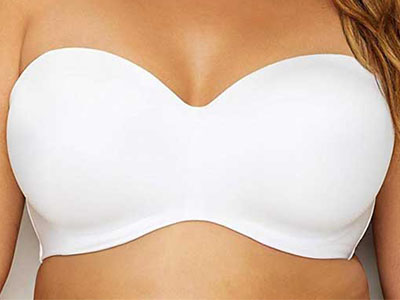 The Smooth Way by Curvy Couture is probably the most multipurpose strapless bras that have been reviewed in this article. This bra will allow you to arrange your straps into the standard features and styles multiple loops situated at the band on the back. What makes this bra unique is the loops found near cup’s frontal inner edge allowing you to have seven different style choices. This means that you can wear the garment as halter top that doesn’t have a lot of fabric and still have hidden bra straps.

The Lane Bryant strapless bra is easily the best brand on offer. The bra is previously available in the standard ‘nude-ish’ and black colors. It is also available in a striking ‘sparrow’ shade and a color referred to as ‘elegant and neutral’. The bra is made from a very light material which normally creates a smooth appearance under clothing, without the usual bulk that is often expected in strapless bras. 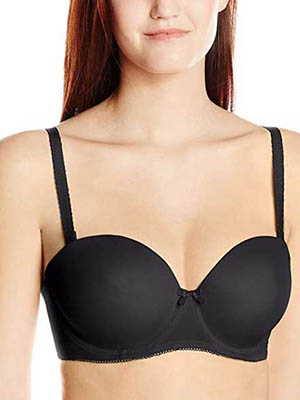 The Freya Deco strapless bra is another brand that acts well as a multi-way, but isn’t a desirable one when it comes to larger cup sizes as a strapless bra. When you get to the F/G cup sizes, the bra doesn’t maintain its shape well. This is because the bra’s cups haven’t been designed well enough to hold heavy breasts reliably.

The bra’s multi-way options include two sets of loops that are found at the back of the bra, and may be the Deco’s most appealing feature. If you are of a smaller cup size, this bra may not work perfectly for you like a strapless. This is the best multi-way configuration strapless bra for sizes F and above.

This is a bra that most people wish came in all sizes. Unfortunately, although the bra is meant for plus size and fuller people, its cup size range ends at a DD. This makes it suitable for plus size women that have smaller breasts, which is a much-undeserved trait for the bra market. This bra will probably work well like a strapless.

The above are the best plus size bras with clear straps.