Home
Maternity
There is Only One Pumping Bra for Large Breasts that You Need. This is…

If you don’t have time to breastfeed, perhaps due to career commitments or lack of enough milk, you should consider pumping. Pumping milk can be easier if you use a pumping bra. Which is the best pumping bra for large breasts? Read on to find out.

{This is the third installment of Brabbly’s reader Patricia’s guest series on nursing bras for full-busted mamas. Don’t miss the first two posts in this series covering when to buy sleep bras for pregnancy and which ones to buy first, and her top picks for supportive underwired and non-underwired nursing bras. Don’t forget to add your two cents in the comments! XO, Jeannette}

No matter how nursing ends up working out in the end, most new moms I know had a hard time with it in the beginning. And there are some mom and baby pairs who never get their act together.

My baby and I are such a pair.

We nursed exclusively for the first couple of weeks. However, due to some serious latch problems, followed by a parade of nursing horribles (mastitis, thrush, and nipple trauma – oh, my!), I transitioned us to bottle-feeding.

I decided to pump exclusively. This was a lot of work, especially in the beginning. But it ended up fine and has allowed me to provide my little guy with my milk full time. I’ve also been able to donate milk to others.

With all that pumping going on, I discovered the wonders of the hands-free pumping bra.

TIP:  If you plan on pumping at all, invest in a hands-free pumping bra or two.

If you end up pumping regularly with an electric double pump, whether it’s full-time or on occasion, or when you return to work, a hands-free pumping bra is a lifesaver. The bra enables you to hook up your pump to yourself and have your hands free, so you can read, work, eat, etc.

20 or 30 minutes sitting at the pump may not seem like a long time to you. But with a baby in the house, you’ll treasure it.

All my frustrations of finding a nursing bra were multiplied when I began a search for a pumping bra. The options are terribly limited for anyone of large cup size.  I couldn’t find anything close to my cup and band size.

But, thankfully, I finally managed to find one bra that worked great. 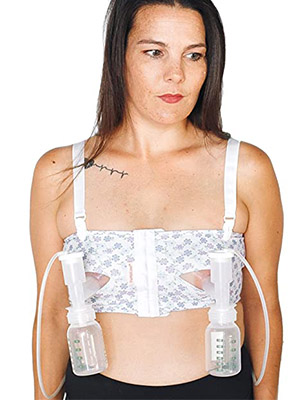 I strongly recommend this bra: it saved my life with pumping back in the early weeks, when I was pumping 7-8 times per day (and through the night) to establish my supply!

The Snugabell Pump Ease Bra is made of stretchy bathing suit-like material and comfortably holds the pump flanges so that they are secure. The fabric has held up well over the months, with occasional cold hand washes.

The bra even comes in cute patterns.  I have two – one in cherries on pink, and one in blue with white polka dots: 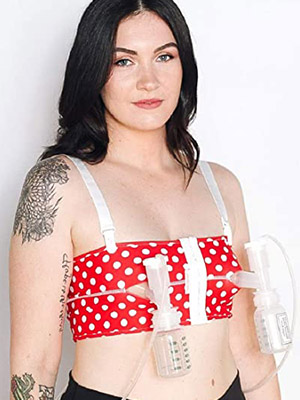 At first, I was wary of the bra sizing because it goes small-medium-large-x large. However, the sizes go by measurements.

This bra style isn’t meant to necessarily look or feel like an ordinary bra with holes cut out of it, like some others I saw. It simply sits on top of the breasts, if that makes sense, without squishing them too much. The Medium size works great for my fluctuating 34G to 34I nursing size.

As shown in the photo above, I wear the pumping bra over my nursing bra – I just take down the flaps first. This makes it extra convenient to slip on when you have to pump, as you don’t have to change into a whole new bra. I believe lots of other hands-free pumping bras share this feature.

Another huge advantage of this bra is that it does not constrict or enclose like a regular bra. You can reach over and under this bra and compress or massage the breasts mid-pump. For me, breast compressions are key to getting maximum milk output while pumping. The compression also helps to prevent clogs.

And there we go. The Snugbell Pump is the best pumping bra for large breasts that I’ve found. You can find the bra on Amazon and other online retailers.