Demi bra vs. balconette bra, what is the difference between these two intimate wears? When should you wear each bra? Read on to find out.

Want to make your melons look fuller and be more rounded? Searching for the best bra for wearing with low-cut dresses or tops? If so, get a demi cup bra or a balconette bra. 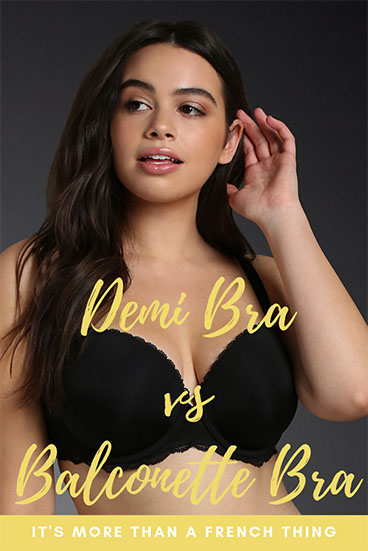 What is a Demi Bra?

A demi cup bra is also known as a half cup.

In French, the word ‘demi’ means “half”. Therefore, as the name suggests, a demi bra does not provide full coverage.

Generally, demi bras offer about half the coverage provided by full-coverage bras.

Any bra whose cups approximately cover the breasts in half is referred to as a demi bra. This is regardless of its design or the material used to make it.

What is a Balconette Style Bra?

Also known as a balcony bra, a balconette bra is a sub-type of demi bra. Like a demi bra, the balconette offers less coverage than a full coverage bra, typically covering half of the lower half of the breasts. When worn, the bra forms an almost horizontal line on the cups.

Balconette bras provide lift and make your cleavage fuller. Moreover, they have a clear distinction between the straps and the cups. The straps are typically thin and barely hold the cups.

When worn, the demi-cup has more of a bottom-heart shape while balconettes tend to be horizontal.

However, even bra manufacturers tend not to have standardized design guidelines for these two types of bras. Therefore, you’ll come across bras that look exactly the same in design labeled as either a balconette or a demi bra.

Should You Wear a Balconette or Demi Bra?

You can wear a demi cup bra regardless of your breast shape. However, the bras look better for some breasts than others.

Generally, the small and average sized breasts look great in demi cup bras. The comfortable bras easily lift the breasts to give them a fuller look.

You can also wear demi cup bras if you have wide-set or separated breasts. The center of demi cup bras is typically a gore, which separates the breasts and keeps them in place.

One of the main concerns about demi cup and balconette bras is spillage. The bras do not do a good job of preventing spillage since they provide less coverage in the cup as well as the sides.

If your breasts are full on top or you have a full figure, you are likely to experience spillage problems, even if you are wearing a fitting bra.

However, if you love the look, nothing should stop you from wearing demi cup and balconette bras occasionally. But for everyday use, you will be better off with a full-coverage bra.

What Can You Wear With a Demi Cup or Balconette Bra?

Almost any type of clothing can be perfectly worn with a demi bra. If you have smaller or average breasts, you will find the demi cup bra a daily must-wear as it provides great lift and enhances the cleavage without extra padding.

You can wear a balconette bra under a V-neck shirt or a low neckline shirt for some extra oomph. You will have a fuller breast and the breast won’t show at all!

Here is a selection of demi bras and balconette bras from some of the leading bra brands.