What to Wear Instead of a Bra (The Ultimate Guide)

Have you been longing for some freedom and wondering what to wear instead of a bra? If so, this guide is for you.

Most women will tell you the time of day they usually look forward to is when they eventually remove their bra. In the confines of our homes, when we finally get to free our breasts from being entrapped by a bra, it definitely becomes the high point of her day!

The freedom and liberation which comes from this simple action cannot be matched.

However, the joy is short lived when you  decide to step out of your home without wearing a bra. This is especially the case if you have large breasts because no one likes walking around with sagging breasts. In short, the breasts need to be supported not only for our comfort, but also for shaping purposes.

Women have been wearing bras for a long time. Before we discus about what can be worn instead of a bra, let’s look at how the bra has evolved with time.

In other parts of the world, women weren’t strained by any kind of undergarment. They just let their breasts be free (this was the glory of olden days)!

For example, the aboriginals from Australia believe that the woman’s breasts are a thing of pride and beauty. The community believes the sisters should remain unstrained and uncovered. In some tribes, the breasts are bejeweled.

The Advent of Corsets and Girdles

In the early 16th century, the civil society had different ideas when it came to undergarments. This is until the corset was invented.

The corset was an inverted cone shape clothing that was used to push up a woman’s breasts to the level where her bosoms were almost spilling out of a low neckline dress, regardless of its puffs and frills.

How Was Stiffness Achieved?

A casing was stuffed with a long piece of whalebone or wood, and then a woman had to step into it before she wore her dress.

The corset became quite popular that it became the instrument that defined a woman’s shape for several centuries after. When you look at it, it was incredible how women had to put up with such contraption so that they could remain in shape.

In the 19th century, the gridle finally outshone the corset. This was an undergarment in which the weaving and busk went all the way to the front from the back. As a result, the woman’s torso formed an S shape which was basically the ultimate sensuality for the woman’s form.

It was in the 18th century when the corset was finally divided into two curves that resemble the modern bra. However, when you look at it practically, it’s really the corset in which the top was supported by straps while the bottom part still concealed the waist like a corset.

It wasn’t until 1907 when the advent of bra (as it’s known presently) was finally seen. With Vogue magazine referring to it as the “brassiere”, the Oxford Dictionary added the word in 1911.

With time, the bra has evolved in different ways. We have different cups, bandeau tops, torpedo or bullet shape, leopard prints as well as laces, push up bras, sports or jog bras, and more. All these appeared in quick succession, one after the other.

There is barely any write-up on women undergarments that doesn’t mention Victoria’s Secret.

The first VS store was opened in Palo Alto in California. According to the legend, Ray Raymond, the founder of Victoria’s Secret, together with his wife, came up with the idea of opening up lingerie-only store for women since it was uncomfortable for them to shop for their undergarments in public in department stores.

At the time, this was a novel idea and what followed after that as it’s said is history!

What to Wear Instead of a Bra

Now that you’re aware of the history of bra and its evolution, let’s discuss how you can unhook it as well as some of the best alternatives of the garment that you can go for.

Here are some of the clothing you can wear instead of a bra. 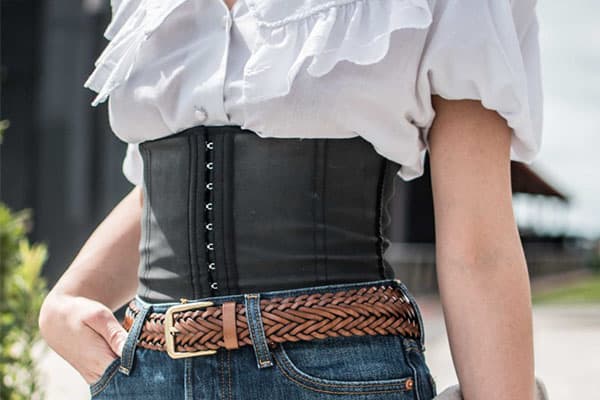 Since we’ve been going through the history and evolution of women’s undergarments, let’s wade back to the 16th century. Don’t give up on us yet, we were just pulling your leg!

Everything about the corset isn’t a joke. The modern-day corset is a comfortable laced up version which will make you feel elegant while it clinches up the waist. This gives you a push up action that is desired by most women.

If you’re longing for something that will make you look sexy for a special person, then modern-day corset is the perfect go-to thing. 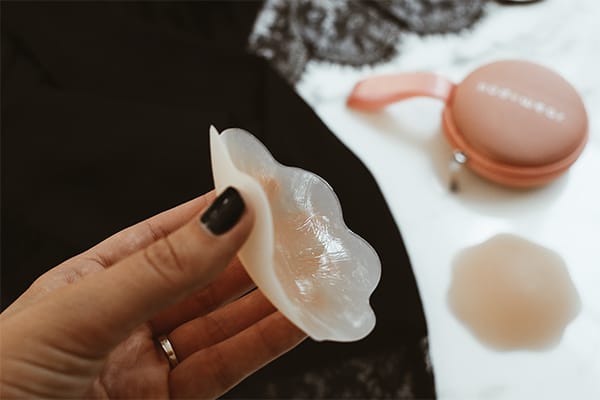 For occasions when you want to get into that special dress that has a plunging neckline and back, you’ll need a pack of self-adhesive nipple covers. The covers are made of different materials and come in various shades of nude.

Nipple covers are very discreet and stay invisible through both thing and clingy clothing. These are a great choice for those occasion you’d like to be braless.

If you are getting a dress tailormade for a particular function and don’t want to wear it a bra, you can opt for sew in cups. These are great for plunging tops, necklines and even formal wear without backs or with lower backs. Sew in bras will make you confident by raising your breasts and keeping them in control.

There are different kinds of clothing that sew in cups can be sewn into.

You can also opt for pasties instead of the traditional sew in cups or nipple covers. Pasties are available in various designs, colors, shapes and can even be bejeweled!

Nipple pasties are not just for burlesque performers or exotic dancers. Today, they are part of the fun, independent and liberated woman’s wardrobe who isn’t afraid of having fun fashion for her breasts. 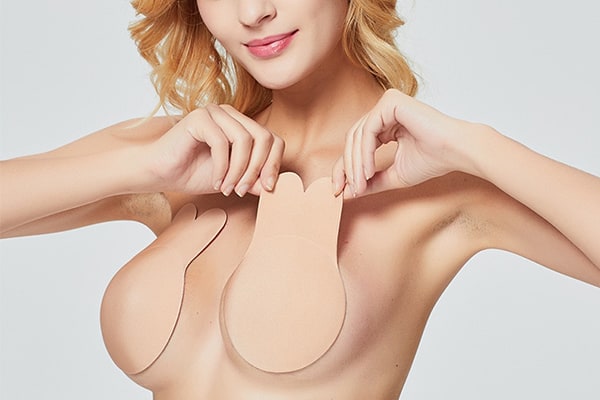 Lift tapes are a great alternative to bras. The bra accessories are used to lift up the breasts using an adhesive tape. In turn, this offers enough support without having to experience the contraption that comes with wearing a bra.

Lift tapes come in handy when you would like to go braless and not draw attention. The tapes support the breasts so that they don’t sag. However, lift tapes might not be great for women with a heavy chest. 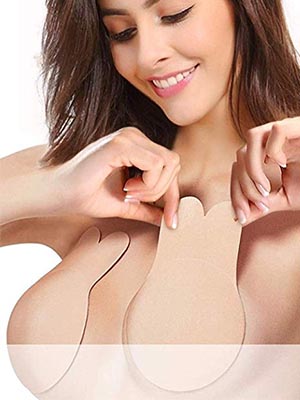 Read our breast lift tape reviews for recommendations of the brands we love. 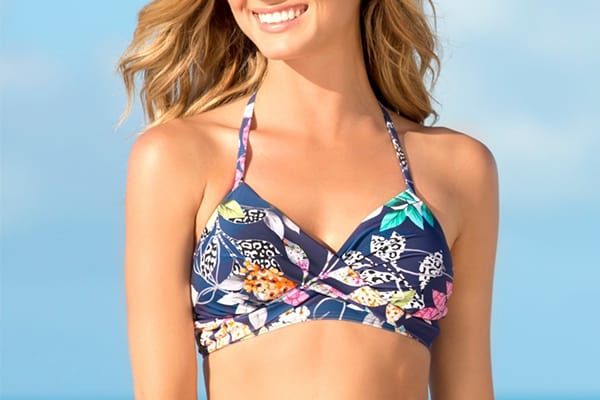 If you can’t use breast lift tapes because you have heavy breasts, there are other options you can consider. If you’re bold and comfortable enough to walk around in your bathing suit instead of the traditional bra, go for it! 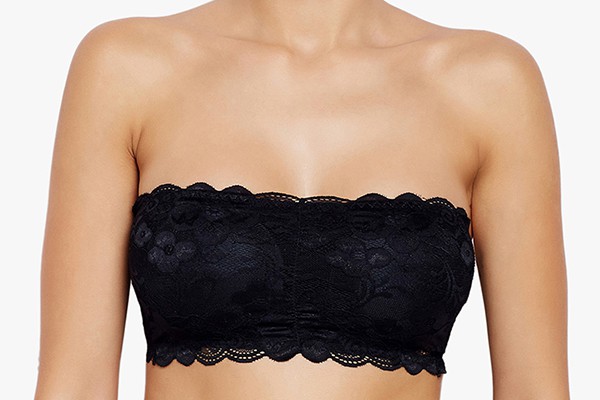 Bandeaus and tube bras are just shorter tube tops . These bra alternatives fits well around the chest area, giving you the kind of coverage you want.

Bandeaus are made from different materials, including cotton, lace, etc. The undergarments also come in a variety of colors that would look perfect underneath a translucent top.

The major downside of a bandeau is that it easily shifts since there is nothing holding it in place. Thus, you should avoid wearing it when you have a lot of activities to do.

Bandeau and tube tops are also not recommended for women with sensitive ribs. If you have sensitive ribs, you want something with a wider band. 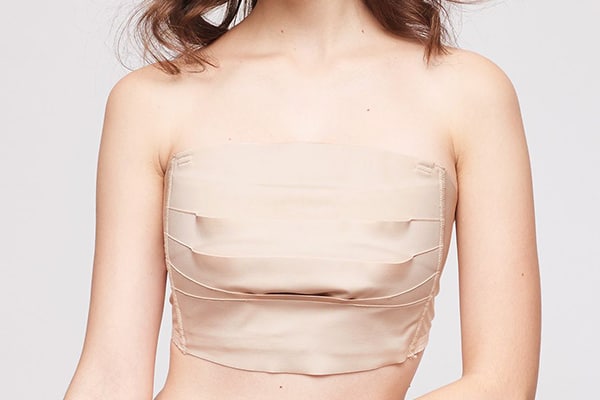 Chest wrapping originates from Japanese culture where it was done using a certain type of special cloth (which is really long) known as the “sarashi”. The cloth is still available today and is practically 10 to 15 feet long and a foot wide. The main idea behind the sarashi is to wrap it several times around the chest in layers, just like a mummy.

However, if the wrap is too tight, you might have some trouble breathing.

Chest wrapping only works for women who are going for a flat chested look or those who are active but can’t wear a sports bra. 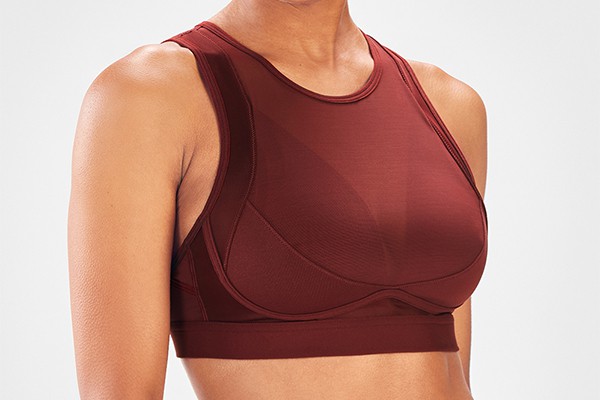 This is not only one of the most comfortable and obvious alternatives to the normal bra, it is a blessing as well! Sports bras are not only comfortable, but are also available in a variety of colors and material such as cotton, spandex, etc.

If you’re an active member of the gym, these types of bras can also be comfortable tops. However, similar to the traditional bras, it’s vital that you find that sports bra that fits perfectly. 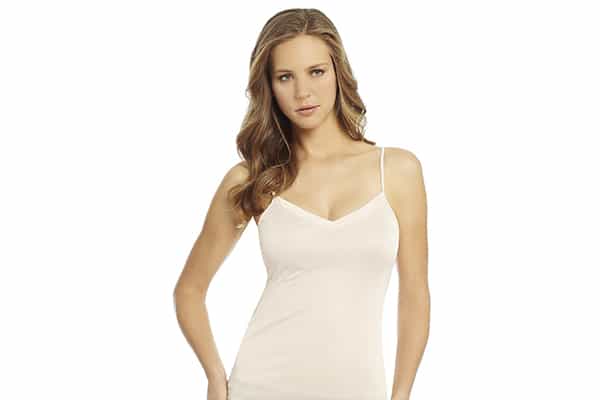 The other great and comfortable alternative to the traditional bra are camisoles. There are camisoles with built-in bras available in the market. However, if you would like to stay away from such, you can go for a tight camisole which will prevent sagging and at the same time provide adequate support. Camisoles made from nylon and spandex material are the perfect option for this purpose.

However,  camisoles l might not be the ideal choice for going out with during a hot summer day because they add an extra layer underneath what you’re wearing. 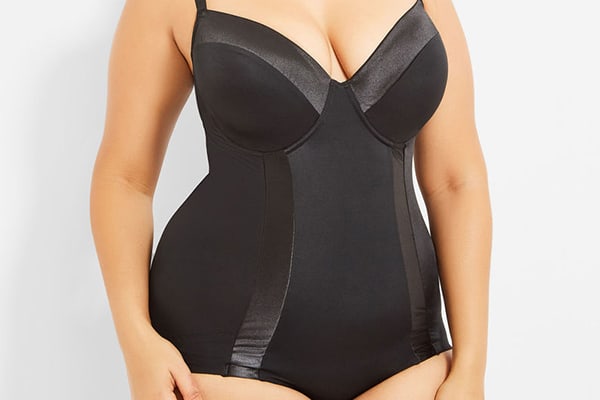 If you’re looking for a brilliant alternative to the traditional bra, then shapewear is perfect. As the name suggests, the undergarment provides your body with great shape, especially for someone who is having trouble trying to shed off some extra pounds!  Wearing shapewear will make you feel good and comfortable.

There are various versions of shapewear made from different types of materials.. The level of compression will be achieved depending on how dense the material is.

Depending on what you find comfortable, you can go for shapewear that offers light to moderate control or even high control. When shopping for shapewear, go for what your body needs.

This is a revolutionary idea that probably hasn’t occurred to most women. A home-made bra can be a great remedy for someone who is tired of readymade bras that don’t fit properly but have to be worn for the most part of the day.

There are numerous sewing patterns for bras and YouTube videos that you can watch to learn how to make your own bra. If you like sewing, then making your own home-made bra will be an easy and rewarding project that will keep you from wanting to wear a store-bought undergarment again. If you’re not fond of sewing, you can find a tailor to make one for you..

If none of the above options suit you, and all you’d like is freedom from contraption, just set the girls free! Don’t be ashamed of the natural look!

Don’t let the societal norms dictate what to wear to care for your sisters. Choose to go without a bra from time to time. One thing most women can attest to is that there is no greater feeling than oing braless!