This is a very pretty bra! If you’re looking for the perfect bra for a D cup, then you should consider the Chantelle Rive Gauche Bra as it comes in various different sizes that go up to an I, plus it also has a wide range of different colors for different skin tones. The bra’s lacy design will make you feel and look sexy as well. 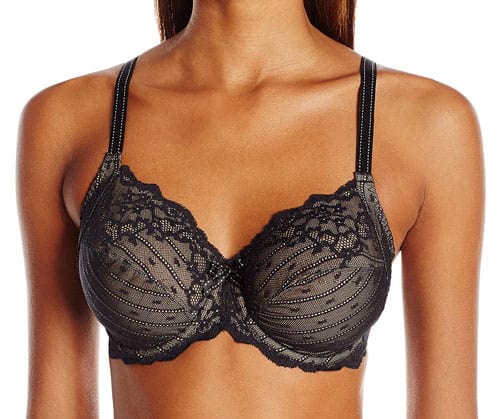 The bra’s straps are close-set and pretty standard, so there are barely any shoulder slips, plus they are fully adjustable. You might find that the material used to design the straps a little stretchy for your liking, and as a result, it won’t seem sturdy.

The great aspect about this bra is that gore is well-constructed, making it sit well on your sternum. Also, the sizing of the gore seems to vary depending on the size of your cup, and for larger sizes, it may go high enough which in turn will restrict the kind of neckline you can put on with this bra.

The cups are unlined with lacy material which causes it to feel a little stretchy and not as sturdy like the Elomi Raquel. In addition, although this bra is supposed to be a full cup, people with fuller melons may experience a little spillage at the top, as a result of how the cup is cut. This isn’t an issue for people with less volume.

The thing that will draw you to this bra without saying is the lace. It’s not an easy task to come across a pretty bra in a larger size, and aesthetically this garment is well-designed. The cup’s interior is also pretty comfortable. With cup adornments and lace though, raises the issue of the bra being visible through clothing.

The cup is what can definitely be described as ‘full’. It does push the breasts a little to the side, which causes the cup to run large. If your cup runs between two sizes, go for the lower size.

The problem with this bra’s band is similar to that if the Goddess Keira. It’s not easy to design a bra for people who wear D cups because it means the width of the band has to be put into consideration. There being only 3 hooks in the larger sizes already puts enough strain on the slightly stretchy bra meaning that there will be less support than there should be. On the bright side, the band does feel true to size. 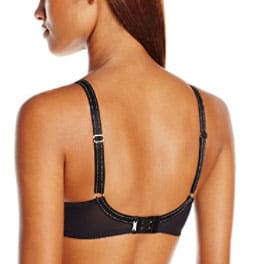 A lot of bras get most features right, but there are still some issues when it comes to the underwire comfort for larger sizes. The underwire’s width in this bra is pretty wide, and as mentioned before it comes in handy at distributing and minimizing a little weight to the sides. The drawback can be seen on the height at which the underwire runs which may cause an uncomfortable feel under the arms. Read: it digs. This might not be a major issue if you’re wide chested, however, if you have a large bust in combination with a small band size, this can be quite a problem, especially if you spend most of the time at work sitting.

The feel of the cups of this bra is great as it has a nice texture on the skin and the weight feels like it is evenly distributed so that no given section of the bra feels as if it is compensating for any other. However, you might find that that the bra won’t feel as supportive as you normally prefer your bra to be.

This bra should be commended for having a solid structure in the sides with boning. However, this isn’t the aspect that will draw you to the bra, but it somewhat does help its case. The bra doesn’t provide the complete rounded appearance, though you’ll find that the ‘pointiness’ is negligible.

Seducing someone and short outings.

Is this bra one of the best bra for a D cup or larger? Definitely not, but it is certainly one of the prettiest designs. Overall, this bra deserves a rating of 3.5 out of 5 stars. The 3 is precisely for the fact that the bra doesn’t offer much support as most people would prefer. While the 0.5 is purely coz the bra will make you feel like a siren.